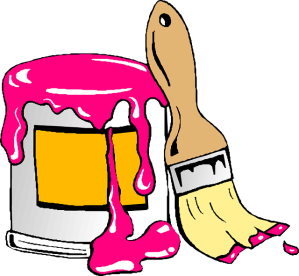 I bet you didn’t even notice I was away..!

I’ve been absent for a couple of weeks or so, due to the fact that I’ve been redecorating my living room.  This was not a job that I was able to achieve in a weekend, due to the scale of the job, the fact that I was doing it on my own without help, and that I work during the day so had to do it in the afternoons and weekends.  Consequently, it took me well over a week and isn’t really finished now.

Everything stopped while the redecoration was happening, even my writing took a back seat.

I first had to move all my furniture into the centre of the room and cover it with plastic sheeting.  Although I pride myself on not being a hoarder, you never really know just how much shit you’ve accumulated until you have to move it somewhere.  I preceded this redecoration project with a mass clear out and took loads of stuff to the tip and gave other stuff away, but still there was loads to find temporary homes for while paint was flying around.  Having all my furniture in a huddle in the middle of the room and covered with plastic sheet, meant I was now without access to my sofa, table, coffee table, tv, radio etc, and had to ‘move into’ my bedroom for the duration.

I know my mattress isn’t the most expensive on the market but after ten days of both sitting on it and sleeping on it, I realise now what utter shit quality it is.  I had my laptop, which gave me access to the internet so I could watch movies and online tv, but eating meals on my bed and doing every single damn thing on my bed became old very quickly and it took days for my spinal injury to get back to its normal level of pain.

Having given up smoking on March 5th, and not having decorated this room for around ten years or so, it took three coats of white to cover the nicotine stained ceiling.  The walls had been a sort of butter colour, which Dulux poetically referred to as ‘Sundust’ and as I now wanted them a very pale grey, I had to cover them with two coats of white to make sure the grey stayed true.  This took a further two days, due to having to wait for coats to dry before doing the next coat etc, nothing is straight forward with decorating is it?  You can’t just get on with it until you’ve finished.  You always have to wait for some damn thing before you can do the next bit, very annoying.

Next I put the grey on the walls, which looked lovely.  This grey paint was extremely expensive  (£46 for five litres) so I only had enough for one coat and was extremely grateful that I had taken the trouble to white out the dingy yellow.  The grey is pale and has an almost china blue quality to it in a certain light.  Not what you would expect from grey at all.  I’m delighted with it.

The last people who lived in my flat put up some of that fancy S shaped coving in the living room, and I wanted to paint it black.  This took another two days alone, as it needed two coats, then I needed to go along the top and bottom with a tiny artists brush and touch up where the ceiling and walls met the edges of the coving.  After so  many hours of craning my next upwards, I doubt I’ll ever be able to look down at my toes again.  The attention to detail paid off though, as the effect is crisp, modern, urban and slightly 1930’s (says I who was born in the 60’s and knows nothing about the real 30’s).

Next was the woodwork, which is the one job I hate with a passion.  It took me two days to sand down two doorframes, a windowsill,  and a mile of skirting and my wrists are still weak and painful and the  skin on my right hand still hasn’t recovered completely.  The ball of my right thumb is still painful too.  Then came two coats of black gloss paint to finish off the job.  I then had to give it a day to begin to dry enough to put the furniture back.

I want to get new flooring for this room, so I ripped up the cream carpet that was down and hiked up to the tip with it all.  Then after hours of cleaning up and carefully putting furniture back, the room is eighty percent finished.  The floor has bright mexican orange linoleum tiles which was obviously installed by council workmen when the building was built, and although it does not ‘go’ with the colour scheme, I will have to live with it until I can save up for some new white vinyl flooring to complete my monochrome look.

I removed the two doors in this room.  The one into the kitchen will not be replaced as I never shut it and the bit of wall behind it is of far more use to me than a door I never close.  The one into the hall will be replace eventually, by one of those glass panelled doors which I hope will allow a little light into the hall, which has no windows and is as dark as the inside of a penguin’s arse.  I found curtains that blend with the look at very reasonable cost, and two of those nice fat tassel tie backs which are usually blood curdlingly expensive (why is a tassel so expensive?) for a tenner each (steps back in amazement).  A couple of black throws from Asda to cover my brown sofa and chair which I can’t afford to replace, and I’m happy with my room.  I just need to save for a new door and new flooring for it to be finished. 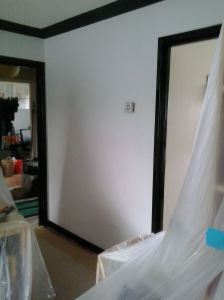 With a slight rearranging of furniture, the room now looks much bigger than before and this new paint job is the only way I can afford to homage the art deco style I love so much. (Yes I know it probably is totally wrong for Art Deco, but it reminds me of it every time I look at it.)

Mother came up for a visit just as I finished and gave her seal of approval, which meant I had another four days of not being able to get back to writing.  Never mind, she paid for stuff at the supermarket so I’m not complaining.

Now I’ve been able to get back to writing, my current work in progress, which is a paranormal novel, has just passed 50k and should end up around 60k (give or take).  This story started out as a planned 4k short story for another anthology I plan to do, but as usual, my characters asserted themselves very quickly and told me in no uncertain terms that they make the rules, not I.  Being outside of my usual sci fi genre, it has been slow to write but a fun experience for me, and one that I look upon as a learning experience.  I can’t wait to see it in print.

Once the first draft of the paranormal novel is done, I can get to editing my next release, the first draft of which has been waiting patiently for me ever since November’s Nanowrimo, when I wrote it.  This is the third in my Sinclair V-Logs series and sees Sam face up to things he never thought he would ever have to deal with.  I’m planning to release it sometime during July.  Watch this space for further details.

I’m delighted with my newly revived living space, and look forward to doing the next room when I feel up to it.  It is good to be back writing; even though I was only away from it for a couple of weeks, it seems like ages and I’ve missed it and felt terribly guilty.  It has probably done me good though, I’ve certainly done a lot of thinking about my future as an author, but that’s for another blog.