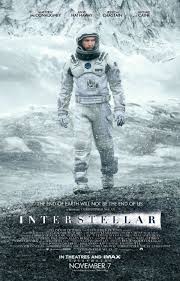 Like many science fiction fans, I’ve been waiting for this movie with much anticipation. It has been hyped as the best space opera movie in years, with every superlative you can think of attached to the write ups and trailers. It came out on DVD and Blue Ray here a couple of days ago, and I watched it yesterday with my mother. We were both very excited to finally be getting to see this much hyped phenomenon, and settled down with our coffee and Belgian Buns with broad grins on our faces.

There are three distinct ‘acts’ in the movie. The first act lays out the back story and sets the scene for our hero, Cooper, to leave Earth in search of a new home on which to settle. I felt this first act to be far too long for the movie. Whilst interesting and pertinent to the story, it makes the whole movie drag a little. There was one point where I was suddenly afraid the movie’s makers had fallen victim to the, “little kid stows away to be with her dad and then wreaks havoc,” trope but to my complete relief, they didn’t.

The second act is Cooper’s flight from Earth and the team’s experiences in space. They navigate the wormhole and arrive at the new galaxy, whereupon they have to find three planets previously identified as possible alternative Earths, and investigate them. A single astronaut was sent to each of the three planets some time previously, and Cooper and the team must rendezvous with each one. Of course their carefully laid plans go quickly awry when the female member of the team takes it upon herself to disobey orders. This causes the loss of a team member, and the loss of twenty three years equivalent Earth time, but she doesn’t seem concerned and Cooper quickly forgives her. This is my biggest complaint about the movie.

In real life, a highly trained astronaut would never disobey orders to such a degree with such losses as the result, but it is one of the most widely used tropes in movies. Seriously guys, can’t you think of anything original when you make these films? This was a huge black spot upon my enjoyment, and one that as an author I find unforgiveable. This second act ends with Cooper apparently lost to the black hole.

The third act brings the whole story to a nice close and ties up all loose ends quite well. Without spoiling it for anyone, the scene inside the black hole with the ‘physical time’ environment is rather a stretch for anyone’s belief and smacked of what I have come to recognise as that typical American shmaltzy aspect movie makers find so necessary these days. Even my mother, who has a degree in physics, raised her eyebrows at that series of scenes. Never mind, I understand the need for poetic licence just as much as the next person.

The ending sets us up nicely for a sequel, which I feel confident will be forthcoming. That one, if indeed it is made, should be even better than this one.

Interstellar would have been far better made as a trilogy. Each of the three acts could have been gone into in far more detail if they each had a movie of their own, and suitable cliffhangers on which to end are there aplenty. The cutting necessary to cram such a lot of stuff into one movie means that details have been lost that would have smoothed edges and added a level of sophistication that is missing from the hodge-podge that is the single movie. The whole thing feels busy and crammed and is far too long at two hours and forty nine minutes.

I give Interstellar four stars. It was a tad over hyped, too crammed, and far too long.