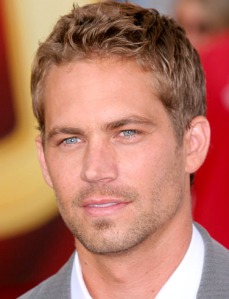 By now, everyone will know that Paul Walker died last Saturday in an horrific car crash.  At first, when I saw someone post about it, I assumed it was another of those ‘celeb dies’ hoaxes that we are all familiar with.  It was a shock to discover it was genuine.  I was surprised how shocked I was, as I’ve never really regarded myself particularly as a Walker fan, but it really knocked me sideways.

As usual, there is a mixture of emotions.  First there is sadness, but also anger and compassion for his soul.  I am angry for two main reasons.  Firstly, because someone who was so vibrantly alive and healthy was taken.  He had a good career and had none of the usual celebrity scandals that most others have.  He worked tirelessly for his charity Reach Out Worldwide and seemed like a genuinely nice guy.  I’m angry that someone like that should be taken when there are so many celebrities who lie, cheat, break the law and generally waste their lives away who are still here and being a complete nuisance.  I was also angry that Paul should die while being a passenger in the car.  Anyone with him as a passenger should realise the care that needs to be taken with such a valuable life?  The road was almost deserted, the weather was good, and Paul was not driving – you do the maths.  I was angry that someone killed Paul.  I was relieved to hear that there is a possibility that some kind of fluid leak just before the crash may have caused some kind of dangerous fault, and I hope this proves correct as I know myself well enough to know that I would find it hard not to apportion blame.  I now find out that he died from burning to death and not the impact, and that makes my heart cry for him.  Of all the possible ways to die, that has to be the worst and I hope with all of my heart that his soul recovers from that trauma.

There has been a huge outpouring of shock and grief at his passing, one of the biggest I’ve seen for any celebrity and that shows how far reaching Paul’s energy is.  Being a nice guy whilst also a celebrity really does make a difference.  It shows just how easy it is to touch someone’s life, even when you’ve never met them.  As a celebrity, you have immense power over people and it is so easy to abuse or ignore that power.  If someone is your fan, every word you say, everything you do and every opinion you express will be adopted as their own.  I’ve seen this hundreds of times.  From changing your fb handle to a name similar to your chosen celebrity, to choosing a boy/girl friend because they look like the person, it happens all over.  There are so many women on facebook who, coincidentally, are called Diesel and who happen also to be Vin Diesel fans, that it must be a very common name in every country and every culture on the planet.  Of course this seems silly, but it illustrates just how much power celebrities have.  I won’t go into how so many of them abuse that power, I’ve blogged on that very subject before, but this is another reason I still can’t get my head around Paul having died.

This also brings up the whole subject of relationships and how we communicate within them.  Paul’s death is a good example of why you should make an effort to let go of grudges, forgive your loved ones their flaws and show them you love them, every day.  You just don’t know how much longer you have with them, and it is so much easier to grieve when you know you showed them you loved them, than cope with the guilt at your angry words.

I hope the Walker family find strength and peace to move forward from their grief, and I send Paul love and healing to leave the trauma of his passing behind.

Error: Twitter did not respond. Please wait a few minutes and refresh this page.