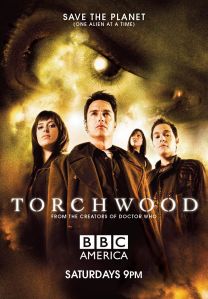 This started out as a review of Torchwood, but has evolved into a review of all TV series that share the genre.  The reason for this is simple – they always make the same mistake.

Now, I loved Torchwood, just as I loved X files, Haven, Stargate SG1, Primeval and all the others like them, (apart from Dr Who, I hate that one.)  The first couple of seasons are fantastic; the team consists of likeable, real characters with enough charisma to look good on TV, without being too ‘made up,’ and the storyline consists of interesting adventures, with a new and exciting episode each week.  There is enough danger to keep you on the edge of your seat, fantastic effects, and no bothersome sub plots to get in the way.

And that’s the problem, that last one in the list – the sub plots.  It’s always the same with every series.  The first two seasons are great, but then they can’t help themselves, they have to make it all political (in the case of the American ones) or introduce complicated and unnecessary intrigue between the characters.  Why do the programme makers always do this?  No one likes it when this happens, and in my opinion, this is why series’ tend to fall apart after the first couple of seasons.

The only series I’ve seen that hasn’t yet made this mistake, is Supernatural.  They almost did, almost.  The first couple of seasons that Crowley was part of, became laborious and boring with his constant fucking things up.  It was predictable and I worried that I might go off the series.  Thankfully though, the programme makers must have had a moment of enlightenment, because they quickly got over that and the series is still wonderful.

I loved the first season of Torchwood, I loved the first two seasons of X files, the first two or three of SG1, the first season of Primeval and the first of Haven, and I look back on them with a mixture of fondness and disappointment.  They could have been fantastic, they could still be popular now if they had just kept it the way we like it.  Simple and enjoyable.  Science fiction is about escapism and I don’t want government cover ups in every single series, or double agents within the team, or bosses with different agendas.  I want to be entertained.

Please, programme makers, give us a series we can enjoy without all that crap.