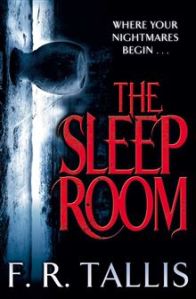 I purchased this book from a supermarket in my local town for £1.95.  I will admit, it was the cover and title that caught my eye initially.  I have never heard of F R Tallis before.  After reading the blurb on the back, I decided it was worth risking the, thankfully low, price.

This book was sufficient to make me want to keep reading it, and I read it all in one day.  After the last three books I read, which all were so painfully awful I couldn’t read more than a couple of pages a day, it was a pleasure to get engrossed.  The story centres around Dr Richardson, a psychiatrist, who goes to work at Wyldehope Hall, a secluded home for the mentally ill, in rural Suffolk.  Spooky goings on make Dr Richardson wonder what is really going on and the book takes on a typical supernatural overtone.

Once I got through chapter one, I had to switch off my ‘author’s head’ and try to look at it purely as a reader, because I soon found some editing mistakes.  The book is written in first person, and there are many consecutive sentences that begin with the word, “I.”  This is probably the most well known thing not to do in first person and Mr Tallis needs to change his editor for so basic a thing to be missed.  The next thing I noticed was in the paragraph that ended page seventeen and began page eighteen.

“I followed Mr Hartley up to the first floor landing, where we passed beneath a stag’s head with glassy black eyes.  When we reached the second floor landing, Mr Hartley unlocked another door, switched on a light, and invited me to enter a wide hallway which had rooms adjoining it on both sides.”

The use of the name Mr Hartley twice in consecutive sentences is, again, a glaring error in editing.  The second occurence of the name should be switched with the word, “he.”

After noticing both of these editing errors, I made a huge effort to switch off my author/editor head.  Things didn’t improve.

I have always been a huge fan of James Herbert, the very famous horror writer.  I’ve read every book he’s written and would have dearly loved to continue doing so, had he not gone and died recently.  Mr Herbert’s last book before he passed away so tragically, was called Ash, and although not his best work, wasn’t at all bad.

The Sleep Room was published on 4th July 2013 (according to Amazon).

With the exception of one or two points, The Sleep Room follows the story of Ash so closely it is both worrying and embarrassing.  If I were a suspicious sort of person, I could suspect Mr Tallis of knocking off one of the most highly respected authors of our time.  It could, of course, be pure coincidence that Mr Tallis just happened to think of an almost identical storyline to that of Mr Herbert.  He might not ever have heard of this most famous of authors, despite the fact that he writes in the same genre.  Anything is possible.

The problem is, James Herbert has a lot, and I mean a lot, of fans who will have read Ash.  If they also happen to stumble upon The Sleep Room and decide, as it’s the same genre, to read it, they will come away thinking Mr Tallis has ripped off Mr Herbert’s story and be pretty annoyed.  And there’s the rub, even if he hasn’t deliberately copied the storyline, people who know James Herbert will think he has, and they will talk.  I noticed it and I will talk.

The way publishing is nowadays, we are the sole trustees of our own integrity.  With almost no legislation and quality control going on, it is up to us to make sure our work is not only of a high standard, but also that it is unique.  To not do so, not only  harms you but harms all authors.

The twist at the end is also a direct copy of the one in the movie, Shutter Island.  This also bring the whole book into question, for me anyway.  Mr Tallis would do well, if he is at all concerned with his brand and his integrity, to take the book down and re-write it, making it unique to himself.

As I said, Mr Tallis may not have deliberately copied James Herbert.  It may be coincidence.  But now that he does know how closely this book follows Mr Herbert’s, does he care enough about his public image and integrity to change things?

I cannot give this book any more than 2 stars, simply because of the disturbing similarity between it, and James Herbert’s Ash.