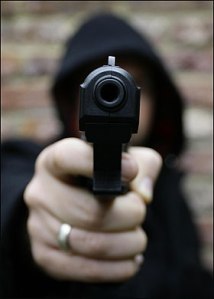 Thankfully, England still doesn’t allow it’s residents to possess firearms, unless you’re a member of a gun club and even then there are loads of rules and regulations and checks and wotnot.  Of course a determined criminal will find a way to obtain a firearm if he/she really wants one, but the ordinary Joe’s like me aren’t allowed.  That’s a good thing, for me at least.

If I was allowed to go into a gun shop and buy a pistol as if I were purchasing a pack of sausages, it would signal the start of something so catastrophic that it hardly bears thinking about.  If I had a gun, I’d undoubtedly use it.

Somehow I just know I could pull that trigger without a moment’s hesitation.  Whether it be because of a mad rapist, burglar or just me wanting to end it all, a gun would feel too natural in my hands.  Like an extension of my own arm and so easy to squeeze that trigger, then afterwards the ‘oh shit.’

I’m spontaneous you see and don’t feel the need to plan things.  I can act on a whim at a moment’s notice and with a gun in my hand, that would probably end in tears.  I know my limitations.