Today I have invited a friend and fellow writer, Suzie McGregor to write a guest blog about herself and her experiences as a children’s author. 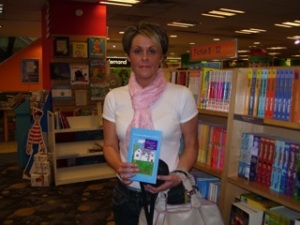 I was born in Edinburgh, Scotland in March 1972 but moved to Wolverhampton in 1975 where my mother was originally from after my parents divorce and have lived here ever since.

As a child I always loved to write stories but as I grew older I never seemed to find the time to write them down but was always making up stories in my head. I trained as an International Beauty Therapist, and worked on and off whilst my children were growing up. During this time I also became interested in the paranormal and became a paranormal investigator for a while which took up a lot of my time and I did start writing a book about investigating the paranormal but as yet it is still not finished.

It was in 2005 whilst I was going through a significantly ‘low’ time in my life that I had the idea of my first book which I completely threw myself into as my escape from the reality of my controlling and suffocating marriage and the depression that came with it. This book was to be the first of a series of children’s stories called ‘The Amazing Adventures of Mystica’. The story is based around a holiday cottage, in the little village of Tarbet, in Kintyre; this was an actual place I used to visit as a child with my Dad, Step mum and half brother and it seemed to me to be the perfect setting for my stories. The main characters ‘Jemima and Elizabeth’ are based on my two own daughters.I attempted to get my book published for three years without succeeding so in the end at a very financially high price I self published my first book in 2008, and my eldest daughter Amelia drew some sketches that I used for the illustrations and she also designed and drew the front cover. I have since written another book in the ‘Mystica’ series, and I’m currently working on the third book, but due to my recent depression problems resurfacing I don’t seem to have the concentration I used to have to get the book written as quickly as the others. I am slowly making progress and if I’m perfectly honest I see no great rush as the next step – which is the publishing – is always a drag due to the fact that it’s such a competitive market. Not only that but I’ve found it is almost impossible to achieve the ‘traditional’ way and I’m not sure how other writers feel but I get the impression that a lot of authors don’t like to help others because they’re scared of the competition, even though there is room in the world for all of us.

I am also currently writing what I hope will be another series of children’s books based around a friend of mine, which will be called ‘Mrs. Magpie.’ Although I’m in the very early stages of writing it, I am also excited about the possibility of these books being published too in the future.

Over the past twelve months I have recently started writing different styles of short stories, none of which have been published or even read by anyone else. I sometimes feel my work isn’t good enough and people will laugh at me. This lack of confidence unfortunately comes from the result of years of psychological abuse making me think I’m ‘not good enough’ plus having a form of dyslexia always makes writing a little more difficult because I can’t see my mistakes. Saying all that I still love to write so when the mood takes me that’s just what I do. Over time I’ve given a lot of thought as to why I prefer to write children’s stories and the only conclusion I came up with is because when I was a child I felt ‘safe’ and ‘looked after’ which is the same feeling I get whilst writing stories for children which gives me a great comfort.

Even with my terrible lack of self confidence underneath I’m a very determined person and when I set my mind to something I don’t give up until I achieve what I set out to do even if it takes years. I suppose the thing that helps me is coming from a spiritual family; they’ve taught me to always look on the positive side of things and if you want something in life then all you have to do is believe and it will be yours. I consider this to be true hence the way my life has changed and I’m now in a wonderful relationship with someone who I can only describe as my guardian angel. He’s my soulmate and a brilliant father to my two daughters and having this has made me more determined to fulfill the dream I set out to accomplish many years ago.

My personal reason for writing is that I find it’s my way of putting my feelings into words without actually having to explain myself. I think that’s why in my first story there is a magical world because in my reality when this story was born all I wanted to do was escape, so I did, to another land called Mystica.